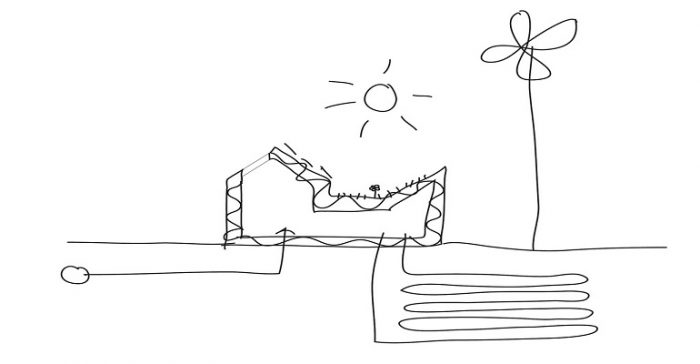 A New Jersey father and son have found a way to reduce not just their energy costs, but also the aches and pains of shoveling snow: As part of what they call their “Zenesis House,” the Raj and Asit Parikh of Paramus installed two ground sourced heat pumps, supplemented by solar thermal energy, to distribute hot water through a network of heating pipes under their driveway. These heating pipes melt snow that accumulates on the home’s driveway, which then gets collected as grey water to be used in laundry, irrigation, and toilets.

The Zenesis House is a passive home designed by Raj Parikh, an engineer, to combat the effects of global climate change. While the Zenesis House is filled with innovations like this, it begs the question: how many people can realistically follow suit? Ground source heat pumps are expensive to bore, let alone adding solar thermal to the mix. In addition, the application is not focused on energy savings, and so the payback would likely not exist for the standard homeowner.

The idea is innovative and collecting snowmelt as grey water presents an opportunity in sustainability and self-sufficiency.  In the end, the world needs more people like the Parikh family, but for now most of us might be better off shoveling.

Who Needs A Shovel? Paramus Family Melts Snowfall Away

From 2012 to 2015, Raj Parikh — an engineer and chairman of the engineering & architecture firm Metropolitan Building Consulting Group — rebuilt his Paramus home stud by stud to be eco-friendly and entirely self-sufficient, Asit said.

The home captures rainwater year round and then uses a solar thermal system to heat the water to 105 degrees, which is stored in multiple insulated tanks, explained Asit, who is a Passive House designer and NYC Real Estate broker.

The water then supplements two ground-source heat pumps developed by Raj to constantly supply 100-degree water to the driveway and walkways, which is distributed via a network of heating pipes underneath the concrete.

The melted snow from the driveway and walkway is recycled back into the system, re-heated, and then used for laundry, irrigation, and toilet water.

The home uses excess electricity produced by its solar photovoltaic system to pump the heated water through the snow melt system, Asit said.