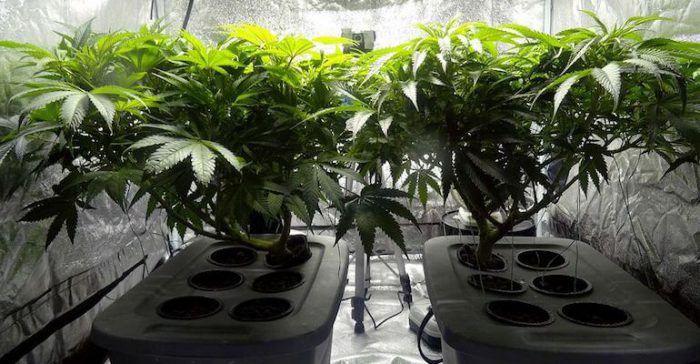 As cannabis has increasingly gone legitimate — about two dozen states had already legalized it in some form before several others eased restrictions on Election Day — electric utilities have struggled to cope with the intensive energy demands of the proliferating industry.

Besides blown transformers and blackouts for utilities in some places, the ascent of Cannabis Inc. has also raised clean-air concerns in parts of the country where fossil fuels are still the main source of electric power.

Even in many places where growing marijuana is legal, cultivators are required to keep their crops out of public view. And in any case, many growers prefer having the ability to control the environment by raising the plants indoors.

Traditionally, indoor producers — formerly relegated to basements, garages and shadowy warehouses — relied on hot, high-intensity lights. When air-conditioning and ventilation were included, the energy used to grow a single marijuana plant would run seven refrigerators for the same period, according to one estimate.

But under an incentive program with the local utility here, Evergrow was able to install more than 100 sophisticated LED grow lights, hoping to reduce costs without sacrificing quality or yield. The utility, Puget Sound Energy, which gets about a third of its electricity from hydropower and most of the rest from coal and natural gas, offers grants to help customers offset the cost of energy-efficiency upgrades.

Although the LED lights are more expensive up front — they can run $1,600 each, as opposed to $350 for the high-pressure sodium lights traditionally used — their lower electricity requirements mean they can save money in the long run.

It is not just that the LED lights take so much less energy to operate. They also run cooler, requiring less air-conditioning.

“It’s a snowball effect,” Mr. Rutter said, surrounded by dozens of specimens with names like Lodi Dodi and Secret Recipe. “You just don’t suck up as much energy.”

For example, Pacific Power, based in Portland, Ore., traced some neighborhood power outages to clusters of residential customers who were taking advantage of state laws allowing up to four marijuana plants per household for personal use.

In Denver, home to one of the largest and most advanced cannabis industries, demand for energy and water ran high enough that the city’s Department of Environmental Health convened a working group to develop recommendations to help make the businesses more sustainable.

The cultivation and sale of marijuana, though permitted under a patchwork of state laws, are still federal crimes. That has made it a challenge for utilities to work closely with growers and led to tensions with federal law enforcement agencies.

As a result, many electric utilities have been reluctant to offer incentives or rebates to cannabis growers for energy-efficiency upgrades. That has been particularly true in the Pacific Northwest, because many of the region’s energy discount programs are financed by the Bonneville Power Administration, a federal nonprofit marketer of electricity whose rules prohibit subsidizing cannabis operations.

Portland General Electric, for instance, had to set up a separate billing system for home-grow operations to keep them separate from Bonneville.

Evergrow’s utility, Puget Sound Energy, is not a Bonneville customer, said Dave Montgomery, who leads the utility’s business energy management group. “It is legal here,” he said of marijuana farming, “and we’re obligated to provide them the same services we would with anybody else.”

Using its own energy-efficiency programs for new enterprises has helped Puget Sound Energy avoid the overloaded transformers that resulted when cannabis cultivation was first catching on, Mr. Montgomery said.

And yet growers, many with experience in illicit operations, have often resisted LEDs, preferring to follow their own tried-and-true methods. Many say that earlier versions of LEDs simply did not perform as well as the high-pressure sodium or metal halide lamps that growers favored, especially when the plants began producing flowers, the valued part of the yield.

But as horticultural lighting companies like Heliospectra and P. L. Light Systems have turned their focus to the cannabis market with more sophisticated LEDs, interest has picked up. Lighting Science, which makes the VividGro lights that Evergrow uses, doubled sales of that line this year, the company recently announced.

The newer products are able to generate not only the light intensity but also the color spectrum the plants need to thrive, without wasting energy on unnecessary parts of the spectrum.

For cannabis, that means growers might use lights that appear white but have more blue for seedlings, and then shift to lighting with more intensity and more red as they mature. Later, shortening the amount of time the plants spend under illumination each day, which mimics how daylight diminishes as the seasons change, triggers flowering.

At Evergrow, the company cultivates most of its plants under LEDs, but keeps one space, known as the energy-suck room, illuminated by high-pressure sodium lights as a kind of experimental control.

The plants in that room, which was hovering around 88 degrees during a recent visit despite 16 fans helping to circulate cold air both from outside and from an overhead air-conditioning vent, produce slightly more flowers but with somewhat less potency.

“It takes a lot of energy to keep this room functioning,” said Mr. Rutter, wearing a T-shirt and jeans under the bright yellow glare, his forehead glistening as he gazed across plants lush with distinctive, hand-shaped leaves and fuzzy, bud-laden flower stalks.

Mr. Rutter estimates that the energy-suck room accounts for more than half of his roughly $5,000 monthly electric bill, though it contains only about one-quarter of the building’s grow lights. Mr. Rutter said that with the utility’s rebates, he ended up paying about $72,000 for the LED lights, which would normally cost around $162,000.