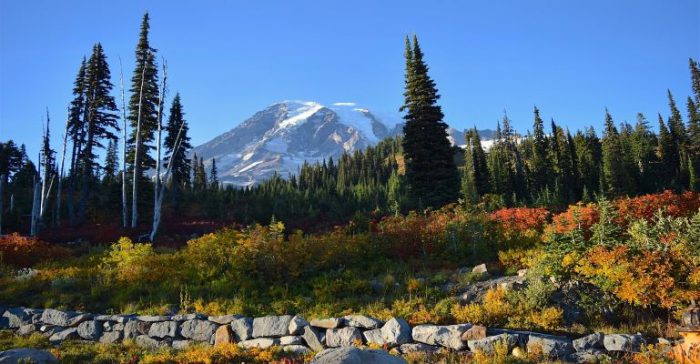 On a recent spring morning, Kamal Adhikari hopped in his Chrysler 200S and made the 30-minute drive from his home in a Seattle suburb to the Poo Poo Point Trailhead in the foothills of the Cascade Mountains. When he arrived at 10 a.m. the trailhead parking lot was full. He ended up paying for parking at a private lot down the road. Then he hit the trail for the nearly 4-mile round-trip hike that winds 1,800 vertical feet up Tiger Mountain to its namesake vista, Poo Poo Point, where paragliders soar into the air and views on a clear day stretch all the way to the Coast Mountains of British Columbia.

“It’s a very busy trail with a moderate hike,” Adhikari says. “Everybody wants to be here.”

The 30-year-old Bhutanese immigrant doesn’t begrudge his fellow hikers for flocking to the trail. “As you gain elevation you can see Mount Rainier from one angle, and you think, ‘Oh wow, this is going to be awesome,’” he says. “A cool breeze hits your face, flowers are blooming in the springtime. It’s so spectacular, so priceless. Out here in the middle of the busy streets, nobody expects those things.”

But the parking snafu makes Adhikari pine for Trailhead Direct, a seasonal bus service that runs from Seattle and its suburbs to nearby trailheads. The service did not run in 2020 because of the COVID-19 pandemic, but on May 11, King County announced that the popular route would return. Trailhead Direct resumed June 5, running weekends and holidays until Sept. 26.

In whisking hikers from busy downtown streets and light rail stations out to hundreds of miles of backcountry trails, Trailhead Direct represents what outdoor recreation groups and transit planners alike believe will be increasingly necessary in years to come: an alternative to driving for people who want to spend some time in nature.

“Not everyone has a car,” says Yvette Lopez-Ledesma, the Urban to Wild Director for the Wilderness Society. “Transit agencies need to ensure that whatever their limitations, people can access public lands with public resources like transit.” With interest in outdoor recreation booming during the pandemic, an analysis by the Outdoor Industry Association found that newer participants in activities such as hiking are more likely to be female, younger, living in an urban area and more ethnically diverse than existing participants.

The Adhikaris are a prime example. The family lives in Kent, a city in south King County that is considered relatively affordable and popular with first-generation immigrants. Their seven-person household—two parents, three siblings, Kamal and his girlfriend—can’t all fit in the one car. So in years past, Adhikari would make two round trips in each direction just for a family hike.

“It took hours,” he says. “In that amount of time, you could already be up on Poo Poo Point.”

That changed in 2019 when King County Metro, which runs bus service throughout the county, began offering the Trailhead Direct service from the light rail station in Tukwila, about 8 miles north of Kent, to Poo Poo Point. Adhikari would drive some family members to the Tukwila station’s park and ride and the rest would catch a ride with a friend. Then everyone would pile onto the Trailhead Direct bus. Or they could all take a bus from Kent to Tukwila and never get in their car in the first place, although that ended up making for a long trip. The $2.75 fare was the same as any local bus ride.

“Black, Latinx, and Asian communities are three times less likely to live near parks and open spaces as White communities,” says Jackie Ostfeld, director of the Sierra Club’s Outdoors For All campaign. “It’s an environmental injustice that there are so many people who don’t have access to parks and green spaces.”

The Adhikaris used the service a half-dozen times that year to go on family hikes, which is what King County Parks and Recreation’s Ryan Dotson hoped would happen. “A lot of these trailheads are full by 8 a.m.,” he says. “With Trailhead Direct, a family can take their time and catch a 10 o’clock bus and get to the trailhead at 11 with guaranteed access.”

Serving families like the Adhikaris was not what King County had in mind when it piloted the service in 2017. At first, they were just trying to stem a literal accident waiting to happen with hikers parking on the shoulder of a busy high-speed road.

“The booming population growth across our region over the past decade-plus has put tremendous pressure on all of our backcountry trailheads,” Dotson says.

With neither the available land nor funds to expand the existing trailhead parking lot, King County Parks and Recreation turned to another branch of local government. King County Metro’s Community Connections program offers transit in parts of the county that don’t have the density or infrastructure for regular fixed-route bus service. Parks and Recreation submitted an application and in 2017, Trailhead Direct was born as a pilot project that ran transit vans from two park and rides on Interstate 90 along a loop to 200 miles of trails (including to Poo Poo Point) in an area known colloquially as the Issaquah Alps.

After that trial run in 2017, the county surveyed riders and the public. “What we found out was that more important than alleviating parking, our customers didn’t have access to their own personal vehicles,” says King County Metro service planner Ryan Miller. “That really changed our thinking. Instead of a satellite parking model, we realized the importance of connecting major urban centers and areas with concentrated transit service directly out to trailheads.”

In 2018, the county added routes from downtown Seattle and the densely populated Capitol Hill neighborhood to other popular trailheads deeper in the Cascades, like Mount Si and Mailbox Peak. Looking to provide service in more socioeconomically, racially and ethnically diverse parts of King County, the Trailhead Direct line from Tukwila was added in 2019.

Existing small buses that served different routes during the week allowed King County Metro to scale up this weekend and holiday service. “We had this fleet of coaches sitting otherwise unused in our bus depot,” says Miller. These small buses proved adequate to the demand, which rose to 35,838 boardings (or roughly 17,500 hikes) in 2019. Running a smaller bus is also significantly cheaper in King County, about $100 per vehicle hour versus the $150 to $180 per vehicle hour for regular bus service.

Transit-accessible hiking is not totally new in North America. Metro areas with that sweet spot of fairly robust public transit and geographic proximity to trails offer car-free hikes in places like Boston, Denver, New York City, and Vancouver. But many of these trips are viewed as “transit hacks” that require catching a regular bus or train depositing the rider close enough to a trailhead. Trailhead Direct’s innovation is to make the service a feature rather than a bug by providing dedicated service for those who might not otherwise piece together an itinerary that incidentally brings them close to a trail.

“That intentionality is pretty important, whether it’s advertising a quicker line to get somewhere or providing really clear instructions,” says Ostfeld. She cited TriMet, the transit agency serving greater Portland, Oregon, that marks parks on the region’s transit map and even features as a component of the city’s signature 4T Trail. Likewise, she said, the club’s Minneapolis chapter has spent a decade mapping out transit-assisted hiking and cycling outings, including an overnight camping trip to a state park. Trailhead Direct seized on its status as not-your-average bus to teach basic hiking etiquette via signage and brochures.

Providing a seamless transit-to-trails connection was the impetus behind Pasadena Transit’s Route 88, which ran shuttle vans on weekends in 2018 to connect riders from an LA Metro subway station to the popular Sam Merrill Trailhead, where hikers can access more than 550 miles of trails in the San Gabriel Mountains. An existing bus serves the residential Altadena neighborhood that backs up against the mountains, but it stops 1.2 miles from the trailhead, while this service took riders straight from subway to trail. The pilot service only lasted six months, however, and resident complaints about noise appear to have stymied the trail shuttle’s return.

Ultimately, Trailhead Direct and Pasadena Transit Route 88 illustrate how specially branded transit-to-trails service can be a double-edged sword. Both operated with dedicated funding streams. In Trailhead Direct’s case, money from Seattle-based outdoor industry powerhouse REI shored up the service along with funds from the voter-approved Seattle Transportation Benefit District. In Pasadena, the $72,000 to run the pilot came from city and county discretionary funds as well as a corporate donation from Edison International. As “nice to have” rather than “need to have” services, they were easier to cut than a workhorse bus route considered essential, whether in the face of neighborhood opposition or a crisis like the pandemic.

But more sustainable funding may be on the way. On April 29, U.S. Rep. Jimmy Gomez (D-CA) and U.S. Sen. Cory Booker (D-NJ) reintroduced the Transit to Trails Act, which if passed would fund approved transit projects with federal dollars up to 80% of their total cost for routes within 175 miles of the service area. The bill passed the House of Representatives on July 1.

That injection of funding would allow places around the country to consider how to get people to trails without overloading trailheads or relying on private car ownership. Los Angeles-based Nature For All, one group behind the Pasadena pilot, has big plans if the act passes for a whole network of trail shuttles from LA Metro’s Gold Line into the San Gabriel Mountains. But Lopez-Ledesma recommends anyone planning a transit to trails system to take a hard look at Trailhead Direct.

“Their program is a real model for these types of services, especially in big cities,” she said.

Back in King County, meanwhile, Adhikari is rooting for Trailhead Direct’s return, with one caveat: “I’m hoping for service in Kent.”

This article was originally written by Gregory Scruggs and published on yes! Solutions Journalism.