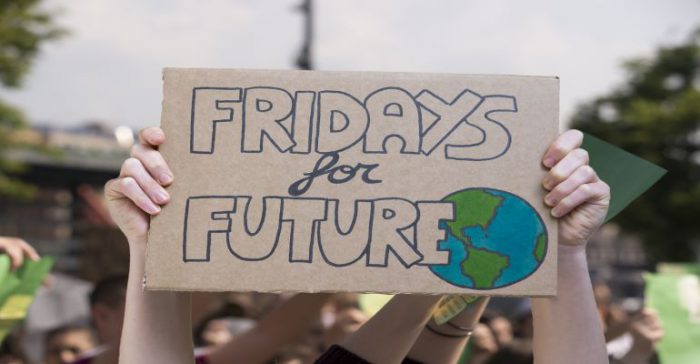 This article was written by Taylor Patterson, ERS

What started out as one young girl standing up for what she believes in has turned into an international phenomenon that continues to grow exponentially in both support and participation by children and adults alike.

You heard it right – on Friday, September 20, and Friday, September 27, kids around the world are walking out of schools to stand in front of town halls and municipality buildings to demand change as part of the Global Climate Strike. The Global Climate Strike is inspired by 16-year-old Greta Thunberg, a Swedish female activist who held a protest of her own outside of the Swedish parliament building back in 2018 to bring attention to the government’s ignorance and consequent lack of action in regard to the planet’s climate crisis. Since that day, Greta’s words and actions have attracted international attention, and she is utilizing her growing public platform to highlight the Earth’s desperate need for change. Her strong will and determination have inspired children around the world to join her call and have a voice in the fight to reduce the use of fossil fuels, eliminate greenhouse gas emissions, and adopt cleaner and more efficient energy practices. This fall’s Global Climate Strike brings the movement to new heights, inviting global participation through the voice of children demanding government intervention to save the Earth from the existing climate crisis.

Since Greta’s courageous and statement-making protest in front of the Swedish parliament, a group of followers called FridaysForFuture (FFF) have organized themselves as an activist group encouraging children everywhere to walk out of their schools every Friday as a way to strike against government bodies. From the perspective of Greta and her young followers, ignoring the dying planet is only putting a nail in the coffin for the future of humanity; and if there is no future, why should today’s young generation prepare for careers that will never come? Thus, leaving school in protest demonstrates how a doomed future eliminates the point of attending school to receive an education. Critically pointing to the vast negative effects of climate change continues to fuel support for FFF and inspire youngsters to not only talk the talk of climate change but walk the walk – by rising to their feet and doing something about it. Schools have even jumped on board recently, as some administrators have been notifying parents and students about the upcoming strike and explaining that students will be excused from class to attend the protests if they have a parent sign a permission slip and accompany the child at the district event. What started out as one young girl standing up for what she believes in has turned into an international phenomenon that continues to grow exponentially in both support and participation by children and adults alike.

Not only are individuals encouraged to show their support by striking, but companies are urged to take a stand for the environment as well. Big-name companies have shared that they will be joining the movement by walking out on Friday. And some are going one step further; Patagonia has also announced it will be shutting down its website and online shopping as further support for the climate strike in hopes to show just how critical this movement is and why activism is important to elicit the desired change.

This article was written by Taylor Patterson for the ERS website.