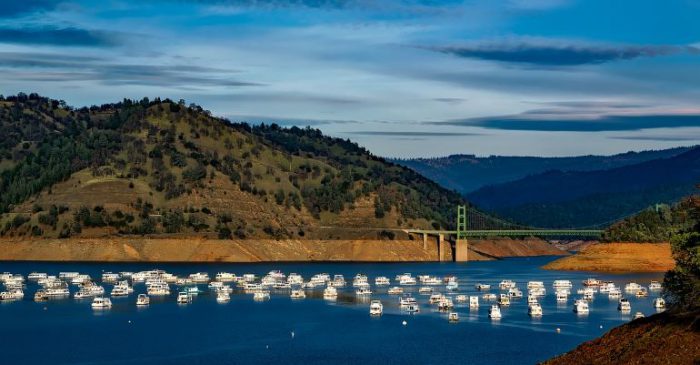 Earlier this month, the water level in Lake Oroville – California’s second-largest reservoir – was so low that dozens of houseboats were hauled out. There wasn’t enough water to hold them.

In a few weeks, officials say, the lake’s water levels are likely to dip even lower – forcing them to shut down one of the state’s largest hydroelectric power plants for the first time since it was built in 1967.

Amid a historic megadrought, the climate crisis and energy crisis in California are about to collide, and set off a vicious cycle. The state’s diminishing water supply is cutting down hydropower, and California is relying more on fossil fuels as extreme summer heat drives up electricity use.

“This situation really highlights the ways in which climate and energy and water are all very tightly linked,” said Noah Diffenbaugh, a climate scientist at Stanford University. With meteorologists anticipating a hot, fiery summer, experts say that cuts to hydropower will increase pressure on the state’s already-stressed power grid, as residents across the region crank up their air conditioners. And as drought desiccates the west, the state’s increasing reliance on gas-fired plants could also compromise its goal of transitioning to carbon-free electricity.

Hydroelectric plants generate electricity from water as it is channeled to farms and cities, harnessing flowing water to power turbines. But as water levels at Oroville and other major reservoirs dip, the amount of power generated from outflows has been cut in half. The Hoover dam at Lake Mead, the largest US reservoir, has reduced its generation capacity by about 25% due to low water levels. So far this year, hydropower has accounted for just 7% of the power generated in California.

That’s because gas-fired power plants are still the easiest, most reliable way to add electricity to the grid. Although the state has been ramping up its renewable energy production, especially from solar and wind power, it lacks the infrastructure to store energy from these sources for long enough to reliably keep residents’ power running through the hottest months. “In order to build a more resilient grid, we need a lot more renewable generation and we need battery storage,” Pincetl said. The state’s goal of building a carbon-free power grid by 2045 makes such improvements especially imperative, she said.

This article was originally published on The Guardian. To read the full article, visit theguardian.com