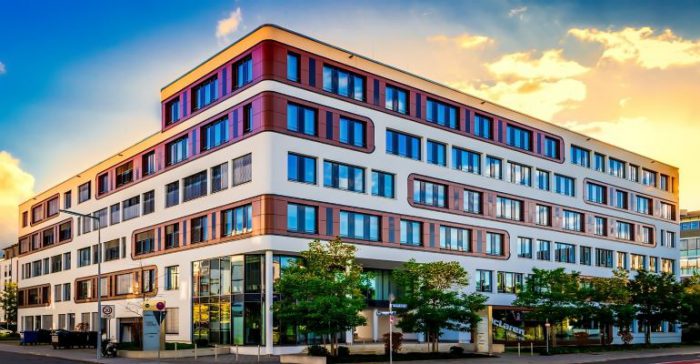 Buildings were first electrified nearly 150 years ago. So, why is it that “building electrification” is now among the energy industry’s most popular buzzwords?

Most buildings run on multiple fuels. They use electricity to power lights, refrigerators and electronic devices. And they consume fossil fuels such as natural gas or propane to power furnaces, boilers and water heaters.

That persistent reliance on fossil fuels makes buildings one of the largest sources of planet-warming pollution. In the United States, buildings account for roughly 40 percent of the country’s energy use and greenhouse gas emissions, and nearly half of all homes rely on natural gas as their primary heating fuel.

The terms “building electrification,” “beneficial electrification” and “building decarbonization” all describe shifting to use electricity rather than fossil fuels for heating and cooking. The goal of such a transition: all-electric buildings powered by solar, wind and other sources of zero-carbon electricity.

What sort of technology is involved in building electrification?

Heat pumps are the big one. Building electrification is an attractive alternative today because fossil-powered appliances and equipment already have viable electric substitutes. It’s just a matter of making — and paying for — the switch.

Heat pumps are the enabling technology of widespread building electrification. Unlike conventional furnaces or boilers, which burn fuels to produce heat, heat pumps use electricity to send heat where it’s needed or remove it from where it’s not, much like a refrigerator. And because heat pumps can either expel heat from the indoors during the cooling season or capture heat outdoors from the ground or air and draw it indoors in winter, they offer a two-for-one benefit: heating and air-conditioning from the same equipment.

Makes sense for moderate climates. But do heat pumps work in cold weather?

Yes, and the technology keeps getting better.

A misconception persists that heat pumps will fail in extreme cold. Not so. A recent Rocky Mountain Institute (RMI) report found that cold-climate heat pumps can heat homes even when the outdoor temperature plunges to -12 degrees Fahrenheit.

Maine is so confident in the performance of cold-climate heat pumps the state adopted a target to install 100,000 heat pumps by 2025.

“It is true that older models, and the models that are designed to be in Southern or Mid-Atlantic climates, do not perform as well in the super-cold temperatures we have here. But the ones we’re promoting perform great in those temperatures,” Efficiency Maine’s Michael Stoddard told GTM.

Are there other benefits to electrifying buildings?

Yes, including public health and safety.  A growing body of research is documenting the danger posed by indoor air pollution in homes with gas stoves.

RMI and several environmental and public interest advocacy groups recently published a report that surveys two decades of research into the links between combustion of gas indoors for cooking and negative effects to human health. Researchers found that cooking with gas can lead to nitrogen dioxide and carbon monoxide levels that would violate outdoor pollution standards and that children in a home with gas cooking have a 42 percent increased risk of having asthma.

Once restaurant chains, professional chefs and home chefs experience cooking with electric ranges or induction cooktops, they tend to prefer the power and control — and safety — of all-electric cooking.

Is it more expensive to run buildings on 100% electricity?

It depends. Full electrification is typically the cheaper option in new buildings. Builders avoid the cost of installing natural-gas lines and meters, and improved energy efficiency can keep rising electricity bills in check. Another RMI report found that new homes outfitted with electric heat pumps, a tight building envelope and rooftop solar panels are economical even in cold-climate locales such as Duluth, Minnesota.

Research has found that in many cases building owners can reduce overall energy use, lower their energy bills and reduce emissions when replacing oil and propane furnaces, boilers and water heaters with electric heat pumps. But consumers may pay a higher upfront cost to install air-source heat pumps or heat-pump water heaters instead of gas models.

In much of the country, rebates or other incentives are not yet available for the more efficient electric equipment. Owners of older buildings may have to pay to upgrade electrical panels and invest in energy efficiency improvements in order to accommodate full electrification.

Can the grid handle a widespread shift to all-electric buildings?

It appears so, but there will be some complications; grid operators must be ready for a new seasonal peak. Ongoing investment will be required in home weatherization, installation of flexible, grid-responsive heat pump water heaters, deployment of long-duration energy storage, and other measures to blunt peak electricity demand during extended cold weather events.

Economywide electrification (including transportation) could increase U.S. electricity consumption by up to 38 percent by 2050, according to the National Renewable Energy Laboratory. Overall “final energy” use would decline by up to 21 percent, however, because electric end-use technologies are so much more efficient than equivalent fossil fuel equipment.

In a recent paper, the Austin-based energy research organization Pecan Street found that if every single-family home in Texas was converted from natural gas to electric heating, households would save up to $452 annually on their utility bills, but the state’s power grid would shift to a winter peak. “The grid could evolve to handle this. This is not a wholesale rethinking of how the grid would have to operate,” co-author Joshua Rhodes told GTM.

What will disrupt the status quo?

Ultimately it will come down to a combination of policy push and consumer pull.

As in many aspects of America’s energy transition, California has taken a leading role on the policy side. Already, around 30 U.S. cities and counties, mostly in California, have followed Berkeley’s lead in passing ordinances that either encourage or mandate all-electric buildings in new construction.

The California Public Utilities Commission is busy writing the rules for a $200 million program that will provide incentives for low-carbon space and water heating technologies in new and existing buildings. And the commission recently revised outdated rules that had made electric space and water heaters ineligible for billions of dollars in rebates under California’s ratepayer-funded energy efficiency programs.

Consumer awareness remains a challenge. A recent poll found that majorities of Californians were unfamiliar with heat pumps and induction cooktops, despite 70 percent preferring wind and solar over natural gas to power appliances in their homes. But in jurisdictions with favorable electricity rates and incentives, such as the region served by Sacramento’s municipal utility, all-electric homes are already becoming the default for new construction.

Does anyone oppose a shift to all-electric buildings?

An American Gas Association study concluded that “policy-driven residential electrification” — that is, bans on fossil fuel heating equipment — would be “burdensome to consumers and to the economy” and result in a spike in peak electricity demand. Clean energy advocates have questioned the study’s cost and emissions assumptions.

The Southern California Gas Company, one of the nation’s largest natural-gas utilities, has mobilized to thwart building electrification in the state. SoCalGas has taken heat for funding a pro-gas advocacy group, Californians for Balanced Energy Solutions, that is working to prevent local governments from enacting all-electric building ordinances.

I’ve heard of “renewable natural gas.” Is that an alternative to fossil gas?

A recent report (PDF) prepared for the California Energy Commission found that “building electrification is likely to be a lower-cost, lower-risk long-term strategy compared to renewable natural gas.”

Are there any other challenges to transitioning to all-electric buildings?

Sure. There’s a long list of challenges, in fact, though all could be overcome. Among them: How to finance a massive scale-up in retrofits to electrify existing buildings? What are the best ways to dispel myths about electrification for contractors (“Heat pumps don’t work in the cold!”) and consumers (“I won’t give up my gas stove!”)? And how to get rid of outdated regulatory barriers?

First movers are already showing the way — see GTM’s profile of one family’s quest to ditch gas in their California home.

Equity issues loom, too. Without intervention by policymakers, the first buildings to electrify will be those whose owners have the most wherewithal to do so. As these buildings abandon gas, the customers who remain may shoulder a larger share of the costs to operate and maintain the distribution system.

This article was written by Justin Gerdes for greentechmedia.com.