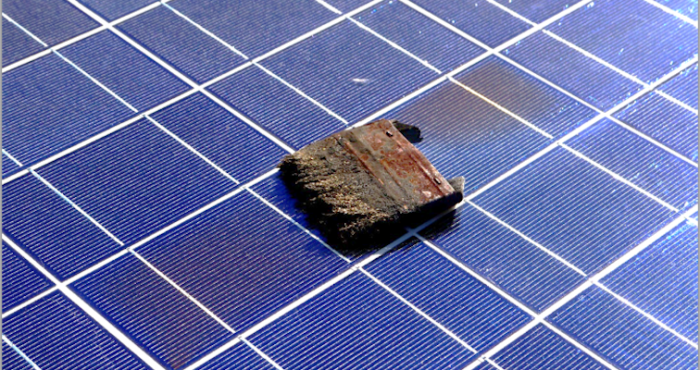 When inspecting solar photovoltaic (PV) systems we often encounter the typical problems such as excess shading from trees, loose wires, and module or cell physical damage. During a recent evaluation we discovered something unusual that provides an interesting opportunity to consider the effects of partial shading on PV panels – a paintbrush stuck to the surface of one of the panels. The system is a 66 kW system consisting of 352 190 W panels connected to a string inverter. The panels are installed on the roof of a commercial building with virtually no shading. As we walked the roof, inspecting the mounting and wiring details, we spotted an object on top of one of the panels. As we got closer we realized that it was the business end of a paintbrush. After taking a photograph, we went to lift it off the panel and found that it was stuck hard to the glass and could not be removed without some warm water and a putty knife. We suspect that the paintbrush had been used to spread a roof membrane sealant and had been left on the panel.

And then there is the bird poop. This installation is immediately adjacent to a wetland. The wetland attracts large birds including great blue herons, seagulls, Geese, osprey, and even the occasional bald eagle. As we surveyed the installation, we found several large “deposits” stuck on the panel glass. They had hardened and had not yet washed off in recent rains.
Both the paintbrush and the poop were very close to the size of a single cell. The cells in a module are connected in series, and shading a single cell results in the current being reduced, due to electrical resistance which generates a hot spot, reducing overall output and potentially damaging cells in the string. Fortunately, nearly all panels manufactured for general installations, including the Evergreen panels installed for this project, incorporate bypass diodes. Bypass diodes allow a string of connected cells to continue supplying power at a reduced voltage, protecting cells from damage due to hot-spotting when the light hitting the panels is not reasonably uniform. What may be some cell damage can be seen on either side of the paintbrush, which appeared to have been stuck on the panel for some time.
Unless the bird poop problem on a system is severe, cleaning is not recommended unless safe access is really easy, as rain will eventually do the job. But by all means, remove any paintbrushes stuck to your PV panels.