The solar eclipse that will occur on August 21st will have an interesting side effect of shutting off a lot of electricity production in America as it rolls across our ever-increasing number of solar arrays.

The shadow from the moon will be 70 miles wide as it races across the United States at well over 1,000 miles per hour, from Portland, Oregon, to Charleston, South Carolina. On the way, it will cut solar power production by about 9,000 MW (see figure below), about as much electricity as produced by fifteen coal fired power plants.

Then the solar power will come roaring back.

How do you keep the lights on when the sun suddenly goes out? The loss and rebound of generation is much larger than our electric grid usually faces, but with advance preparation, the grid will make it through the event just fine, largely because of the diversity of energy sources that we still have.

Nuclear plants will continue to provide the backbone of the system, and generators running on natural gas will power up quickly as the sun is blocked, and then power down even faster as the sun reappears, a costly but easy fix.

This energy diversity is critical because our energy system has to function through more and more frequent challenges, like extreme cold and Polar Vortices, water droughts and low mountain snowpack, heat waves with wind doldrums, and other problems. Those who think we should only have one type of energy, either just fossil fuel or just renewables, rarely consider the problems encountered by the lack of diversity.

The effect of the August eclipse will vary from place to place. And the effect will depend heavily on local weather. If it’s sunny, the loss of power will be large. If it is cloudy or raining, the loss will be small.

Parts of twelve states will be totally darkened; many others will see the sun partly or mostly obscured. The eclipse will occur over almost a 3-hour period at each spot, but totality will only be about 3 minutes. California will not see a total eclipse, but the sun will be significantly obscured.

At peak sunshine, California gets 40% of its energy from solar panels, and it will lose nearly three-quarters of that during this eclipse. According to the California Independent System Operator, power output will drop by 70 MW a minute and then come thundering back at 90 MW a minute.

CSIO is urging utilities to be ready, as is its counterpart in the Middle Atlantic States, the PJM Interconnection. 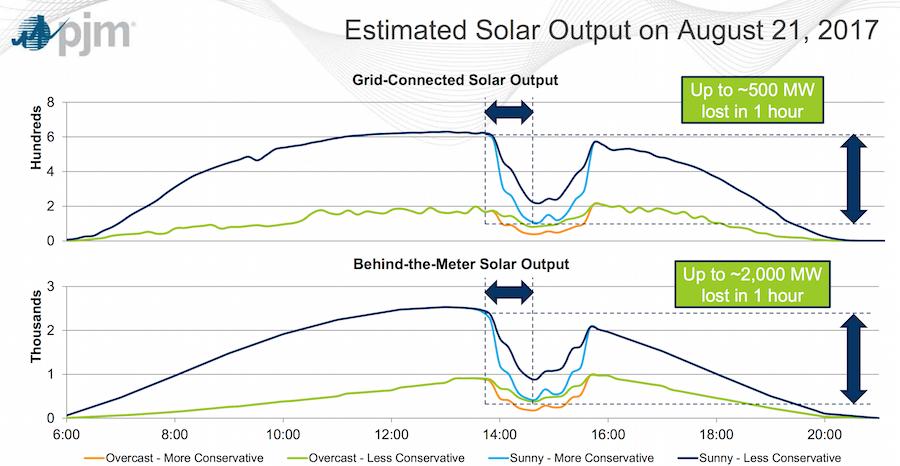 Power grids are not set up for eclipses, which happen much faster than a sunrise or a sunset, and over a broader area than a typical cloud bank. The North American Electric Reliability Corporation, the entity that establishes and enforces grid rules, has urged areas with high solar penetration to prepare detailed plans, especially Nevada and North Carolina.

North Carolina will be hard hit since it has installed more than 3,000 MW of solar power capacity. The moon will block more than 90% of the state’s sunshine at exactly the time when these solar farms are operating at maximum capacity.

While Columbia, South Carolina will have 100% solar blockage, Charlotte, North Carolina will have 95% darkness, and Raleigh will lose 90% of its sunshine. The utilities in this region are planning to unplug the solar arrays beforehand, and ramp natural gas up and down to handle this rapid loss of sunshine.

Charlotte-based Duke Energy is preparing for the eclipse by notifying the owners of solar farms to prepare to be temporarily disconnected in advance of the event. Duke will replace the solar lost with backup power from their natural gas plants.

California is in somewhat better shape because the drought is ending and more water is available this year so hydroelectric plants can raise and lower their power output very quickly.

Still, the California State Public Utilities Commission is urging citizens to conserve power for two hours during the eclipse by turning off lights and appliances in an effort to save the 3,500 MW that will be lost.

The obvious long-term solution to these natural problems, as well as those that are human-made, is to maintain a diverse energy mix that limits the threat to the system from interruptions of any single source. A mixture of renewables, nuclear and gas is the best mix to handle any situation.

This will be the first coast-to-coast solar eclipse in the United States since 1918, when America had no solar arrays. The next total solar eclipse in North America will occur in only seven years, on April 8, 2024 when we will have even more solar power (see figure below). Hopefully, we will be smart enough to maintain our power diversity, especially nuclear and hydro.

But what we learn from this eclipse will be used again pretty quickly.