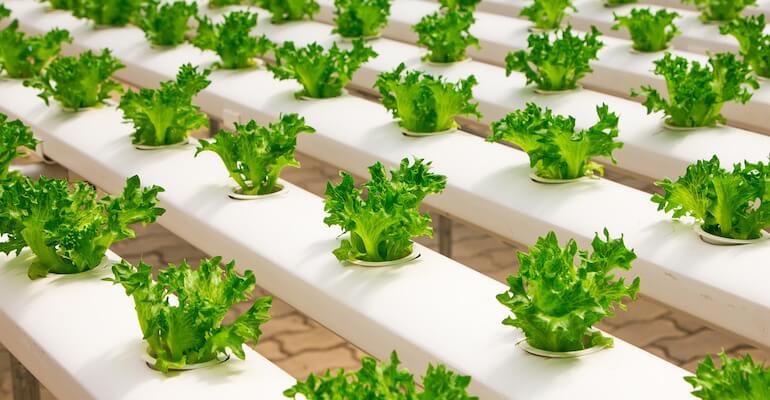 There are multiple considerations that a business faces when evaluating light sources to use for horticultural lighting, including but not limited to: light intensity, spectrum, uniformity of light distribution, energy efficiency, and fixture lifespan. Horticultural lighting systems convert electrical energy into light that plants use to drive photosynthesis for growth and development, and LED-based sources can offer a spectrum tuned for the application. Still, ascertaining the efficiency or efficacy of such solid-state lighting (SSL) systems is a challenge. There are several factors that impact the overall efficiency of a lighting system, relative to the specific application at hand. This article will discuss how the design of a lighting fixture influences energy efficiency and how in turn this reality can influence the overall profitability of a controlled-environment plant growth facility.
Metrics for horticulture
We will start by defining the proper metrics used for horticultural lighting applications to add context for the rest of the article. Plants primarily use wavelengths of light within the visible range of 400-700 nm to drive photosynthesis (Fig. 2), which is why this range is also called photosynthetically active radiation (PAR). Photosynthetic photon flux (PPF) measures the total amount of PAR that is produced by a lighting system each second. This measurement is taken using a specialized instrument called an integrating sphere that captures and measures essentially all photons emitted by a lighting system. The unit used to express PPF is micromoles per second (μmol/s).

Photosynthetic photon flux density (PPFD) measures the amount of PAR that arrives at the plant canopy. PPFD is a spot measurement of a specific location on your plant canopy, and it is measured in micromoles per square meter per second (μmol/m2/s).
Last, we will discuss photon efficacy, which refers to how efficient a horticultural lighting system is at converting electrical energy into photons of PAR. If the PPF of the light is known along with the input wattage, you can easily calculate photon efficacy for a horticultural lighting system. Given the unit for PPF is μmol/s, and the unit to measure watts is joules per second (J/s), the seconds in the numerator and denominator cancel out, and the resulting unit becomes μmol/J, which is the unit of measure used to represent efficacy. The higher this number is, the more efficient a lighting system is at converting electrical energy into photons of PAR.
Common approaches to horticultural lighting
Now that we have covered the proper metrics to characterize horticultural systems, we can dive into the nuances of fixture design and what makes a horticultural lighting system energy efficient. The most commonly used horticultural lighting systems worldwide are based on high-intensity discharge (HID) lighting and mainly high-pressure sodium (HPS) lamps. HPS fixtures were not designed specifically to grow plants. They were designed to light roadways and parking garages. Ready availability and high output levels, however, led to deployment in horticulture and subsequently their popularity in the application can be attributed to the fact that they deliver very high light intensities and most of the light emitted is in the 565-700-nm range – effective wavebands that can drive photosynthesis.
One drawback to using HPS fixtures for horticultural lighting is the large amount of radiant heat that is produced. The surface temperature of HPS bulbs can reach temperatures above 800°F, which necessitates adequate distances between the plant canopy and the fixture to avoid damage to plant tissues. The inverse square law comes into play as you increase the mounting height of a fixture, which can reduce the coefficient of utilization (CU), a term used by lighting professionals to describe how effective a luminaire is at delivering light to a target plane. The energy efficacy of HPS fixtures has increased over the years and with the advent of double-ended HPS fixtures that are now capable of achieving photon efficacies of 1.7 μmol/J.
Moving toward LEDs
Let’s consider the chronology of the application leading to LED use in horticultural lighting. In 2014 the most efficient LED-based horticultural lighting systems were as efficient as double-ended HPS fixtures. The long lifespan (L70 ≥50,000 hours) compared to that of an HPS bulb intrigued several growers to switch to LEDs. However, the relatively high cost of LED-based horticultural lighting systems compared to HPS fixtures limited the transition to SSL despite comparable efficacy.
LED chip manufacturers have improved the efficacy of components available to horticultural lighting manufacturers over the last several years, which has enabled them to significantly improve photon efficacies that now surpass HPS fixtures, and they continue to improve every year. Indeed, LED-based horticultural lighting systems are now capable of achieving photon efficacies 45% greater than double-ended HPS fixtures. While the improved efficacy of individual components has improved the efficiency of LED-based horticultural lighting, it is also just one variable responsible for the improvement over HPS technology.
LED system thermals
There is a common misconception surrounding LED lighting when it comes to heat produced by the fixture. Many growers believe that LEDs produce less heat than HPS fixtures, which is only true if the LED fixture is driven at a lower wattage. If you have a 600W LED fixture and a 600W double-ended HPS, they will produce heat in the same general range from a magnitude perspective.
The major difference between LED and HPS systems is how much PAR energy is produced from those 600W (goes back to efficacy), and how the heat is radiated from the fixture. Most heat from HPS lamps is radiated down towards the crop canopy, whereas LEDs produce most of their heat at the connection site of the component where it is assembled to a printed circuit board (PCB). And the heat is typically conducted to the PCB and maybe a heat sink, and removed via upward convection.
So the proximity at which a fixture can be placed near plants without damaging tissue from radiant heat is one of the major benefits of LEDs as a source for horticultural lighting systems. However, if this heat is not removed effectively from the PCB with an appropriate thermal management system, the longevity of the LED components will decrease significantly.
There are two ways to cool lighting systems in commercial horticultural environments that will impact the photon efficacy of the fixture. Passively cooled fixtures utilize heat sinks to dissipate heat from the circuit board, while actively cooled fixtures rely on fans or water to dissipate heat. Fans that are used to cool fixtures consume energy and will decrease the overall photon efficacy of a fixture. Additionally, if a fan fails during the operation of the fixture, the LEDs on the PCB are likely to overheat and burn out. Even if they don’t fail catastrophically, reduced power output will dramatically reduce the usable life of the LED fixture. This is a very important feature that growers need to consider when comparing horticultural lighting systems.