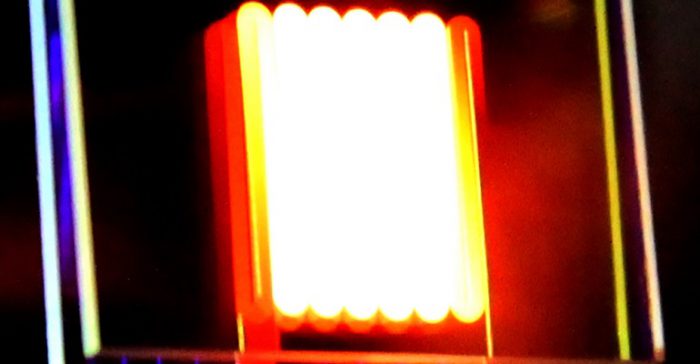 LED lighting is the best we’ve got, and it’ll stay that way for some time. But, our best and brightest physicists have been up to some very neat tricks in the laboratory, making progress on even more efficient lighting. Researchers at Purdue and MIT have devised a method to dramatically increase the efficiency of an incandescent lamp using a filter that recycles wasted wavelengths of light, which usually just adds heat, back into visible light. The potential is big: they hope to achieve 40% conversion of electrical energy into light, way up from the approximately 3% of a traditional incandescent. For comparison, compact fluorescent lamps are 7% to 13% efficient, and the very best LEDs are 29% efficient. The filter innovation still needs work to increase its longevity and decrease costs before it could be considered commercially.

Believe it or not, they already have some competition for the flashiest laboratory-scale lighting project. Some of their MIT compatriots have already demonstrated an LED innovation that emits more light energy than it’s given in electricity. And no, it’s not a perpetual energy device; it takes in heat from its surroundings.

Incandescent lighting could make a comeback with a new type of filter that “recycles” infrared photons and improves efficiency, an innovation that also could enable solar cells to convert heat into electricity more efficiently than conventional photovoltaic technology.

“The biggest disadvantage of incandescent lighting has been a lack of energy efficiency,” said Peter Bermel, an assistant professor in Purdue University’s School of Electrical and Computer Engineering. “The way incandescent lights work is that you heat a filament to a certain temperature and it emits a broad band of light, but only about one in 20 photons or so is actually visible to the human eye; the other 19 photons are essentially just wasted as heat.”

Now researchers have developed a potential solution: a new type of filter to recycle wasted photons that is made out of alternating layers of materials such as silicon dioxide and tantalum dioxide, each with thicknesses less than 1/100th that of a human hair. This approach could improve incandescent lighting efficiency by 10 times, making it more efficient than commercial compact fluorescent and LED lighting, said Bermel, who worked with researchers at the Massachusetts Institute of Technology to develop the filter.

The team’s findings are detailed in a paper appearing on Monday (Jan. 11) in the journal Nature Nanotechnology.

The efficiency of the new lighting source already approaches that of some fluorescent and LED bulbs, and could approach 40 percent, surpassing all existing energy-efficient lighting sources. Commercially available fluorescent lighting has an efficiency range from 7 percent to 13 percent and LED lighting products range from 5 percent to 13 percent, while more advanced LED lamps under development may range as high as 29 percent.