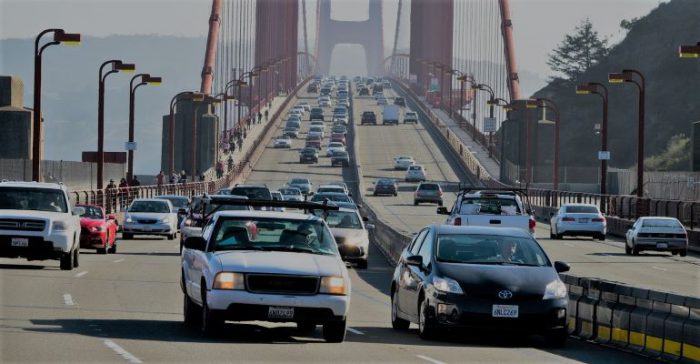 Facing a record-breaking wildfire season as well as years of heat waves and droughts exacerbated by climate change, the Golden State is seeking to accelerate the shift away from combustion engines on its roads, which account for more greenhouse gas emissions than any other source.

“For too many decades, we have allowed cars to pollute the air that our children and families breathe,” Newsom in announcing an executive order Wednesday. “You deserve to have a car that doesn’t give your kids asthma. Our cars shouldn’t make wildfires worse — and create more days filled with smoky air.”

Under Newsom’s order, the state’s air regulator, the California Air Resources Board, will develop regulations that ensure every new passenger car and truck sold in the state is electric or otherwise “zero-emissions” by 2035. The plan would give industry until 2045 to make sure medium- and heavy-duty vehicles are zero-emissions when feasible. Transportation currently accounts for the largest source of emissions in the state, outpacing the industrial, agricultural and residential sectors combined.

The order does not prevent Californians from owning gas-powered cars, selling used cars with internal-combustion engines or buying them outside the state.

Because of its market muscle, California’s move could have ripple effects across the country and propel automakers to ramp up production of electric vehicles. Thirteen other states and the District of Columbia already follow California’s fuel efficiency standards, and auto manufacturers have long built cars to meet its more stringent specifications.

“We’ve seen this show before, where California does something, and others jump on board,” said Karl Brauer, a veteran auto industry analyst now serving as executive analyst at the website iSeeCars. The auto industry is already embarking on a rapid shift toward autonomous vehicles and electrification, he noted.

But to meet the aggressive timeline laid out by Newsom on Wednesday, the market for electric vehicles in the state would need to boom in coming years.

California already has the nation’s largest market for electric and hybrid vehicles, accounting for roughly half of all such cars sold in the United States. The state saw approximately 256,800 registrations for electric vehicles in 2018, according to data compiled by the Energy Department. Still, zero-emission vehicles currently amount to barely 10 percent of the state’s automobile market; gas-powered cars continue to make up more than three-quarters of sales.

“It’s a big deal. California’s largest source of emissions is the transportation sector, and the state has struggled to tackle it,” said Leah Stokes, a political scientist at the University of California at Santa Barbara. Changing the state’s car culture “is not an easy thing to stick your neck out for.” But, she added of Newsom, “When the state is on fire, he’s got to show leadership.”

Representatives for automakers and the fossil fuel industry, meanwhile, were quick to criticize the latest action by California leaders to tackle greenhouse gas emissions.

John Bozella, who heads a group that represents the nation’s automakers, said companies have long committed to ramping up electric vehicle production and already offer dozens of models, with many more in the pipeline.

“But neither mandates nor bans build successful markets,” he said in a statement, adding that dictating a date to phase out gas automobiles is premature. “Much more needs to be done to increase consumer demand for Zero Emission Vehicles in order for California to reach its goals. It will require increased infrastructure, incentives, fleet requirements, building codes, and much more.”

Chet Thompson, head of American Fuel and Petrochemical Manufacturers, a lobbying group for refineries that make gasoline and other fuels, argued that Newsom lacks the authority to limit car buyers’ choices. “Regardless, pursuing this goal would be among the most inefficient, unpopular, and regressive methods to reduce carbon emissions,” he said.

Newsom extolled the potential environmental and economic benefits that a shift away from gas cars could bring his state during a news conference Wednesday.

“This is the next big global industry, and California wants to dominate it,” he said.

He painted a contrast between manufacturers embracing electrification and those attempting to resist the head winds. California is home to the country’s largest electric vehicle manufacturer, Tesla, which is based in Fremont. Tesla announced a plan this week to vertically integrate its battery manufacturing, attempting to unite all the elements of battery production under a single umbrella to usher in a push to build 20 million vehicles per year, up from existing production of less than half a million.

Newsom highlighted the example of another storied U.S. car company, Ford Motor, which has introduced electric vehicles into its fleet. “They’re not willing to suffer the fate of a future of dirtier air, dirtier water and more climate disruption,” he said.

Still, Newsom said he expected some resistance from other automakers. “There are some automobile manufacturers that don’t [get it], and they’re pushing back against California’s leadership as they have in the past,” he said. “I’m not naive that everybody is going to join hands on this.”

In recent years, California has been mired in a bitter fight with the Trump administration, which this spring finalized a rule that would weaken the federal government’s gas mileage standards for the nation’s cars and pickup trucks. The change undercut President Barack Obama’s most significant effort to combat climate change, after his administration negotiated a deal on more-stringent standards with California and automakers.

At the same time, the Trump administration is attempting to revoke California’s long-standing authority to set its own standards. California, joined by nearly two dozen states, has sued the administration for the right to set its own fuel efficiency targets — and to have other states follow its lead. That legal tug-of-war is ongoing.

Brauer, the analyst, viewed Newsom’s latest announcement with a measure of skepticism, saying the move makes the governor “look very environmentally progressive [but] without any accountability. Because who is going to be in government in 2035, compared to who is there now?”

He noted that California has set past targets for electric or zero-emissions vehicles that automakers had to sell, figures that were “constantly updated or revised or delayed” as the companies struggled to comply.

Still, a push to meet California’s deadline would represent a fundamental shift for an industry still heavily reliant on gas-guzzling pickup trucks and SUVs to meet its annual sales goals.

The announcement comes as Newsom faces increased pressure from activists to do more to halt oil and gas drilling in the state.

His executive order also calls for an end to hydraulic fracturing, or fracking, within four years in California, but left it to the state legislature to enact a ban. Fracking has earned the ire of environmentalists both for the risks it poses to drinking water supplies and to the emissions that result from the burning of natural gas.

Under Newsom’s watch, the state approved drilling permits for more than 1,400 new oil and gas wells in the first half of 2020, according to the Center for Biological Diversity. Kassie Siegel, director of the advocacy group’s Climate Law Institute, praised the phaseout of gas-powered cars as “a very big step” for California but said the governor still had not gone far enough to curtail oil production.

“Newsom can’t claim climate leadership while handing out permits to oil companies to drill and frack,” she said. “He has the power to protect Californians from oil industry pollution, and he needs to use it, not pass the buck.”