Calculating the Measured Efficiency of a Motor

The final measured efficiency of a motor is calculated based only on the elements of the particular application they’re used in. For the motors themselves, without a load, manufacturers provide ratings based on standard formulas. To understand high efficiency motors you only need to know what makes them different.

But first, let’s look at the basic concept used for explaining motor efficiency, which says that efficiency is the ratio between the shaft output power and the electrical input power. Shaft output can be measured in horsepower or watts. We’ll use watts for the purposes of this article. The formula most often used is the simple one mentioned above:

Once you’ve used this formula and found your efficiency – and it’s not 100 percent – it’s time to consider the losses that occurred inside the motor. Motor efficiency drops based on a number of known factors where power is lost as current through the motor is met with a variety of resistances. These losses can include the wiring and its resistance, iron losses due to magnetic events, and thermal losses.

The electrical power that is lost in the primary rotor and in the secondary stator windings are called resistance losses (or copper losses, because they are based on the characteristics of the wire used including its diameter and length). Both primary and secondary resistance losses vary with the load in proportion to the current squared. For example:

Other losses include, iron losses, as mentioned above. These losses are the result of the amount of magnetic energy dissipated when the motor’s magnetic field is applied to the stator core. Other factors involved include mechanical losses, which involve the friction in the motor bearings and stray losses, which are basically any remaining losses that are left after the resistance, iron, and mechanical losses are calculated. 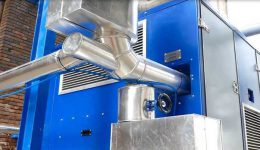