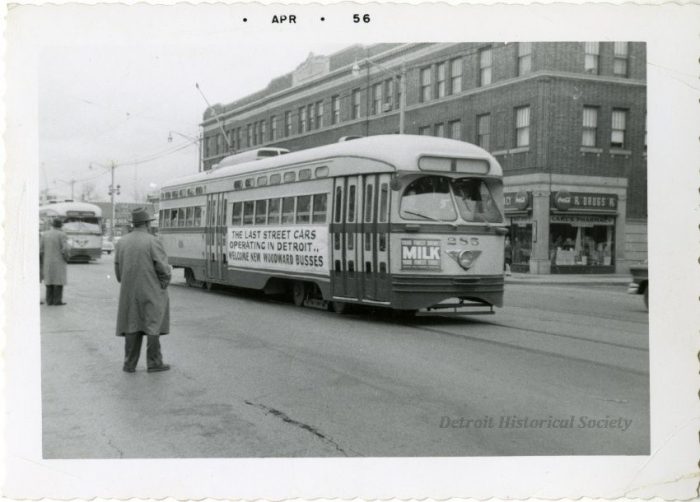 In Detroit, the first electric streetcars went into service in 1886 — 10 years before Henry Ford took his first trial run in a small, four-wheeled vehicle he called a “Quadricycle,” and long before Detroit became the “Motor City” and home to the Big Three. Not coincidentally, that same year, Detroit had been electrically wired by the Edison Illuminating Company (precursor to today’s DTE Energy), and 10 years later a young Henry Ford was invited to dinner with Thomas Edison. The two became lifelong friends.

Prior to the arrival of electricity, horse-drawn streetcars (or trolleys) had been traversing the region since 1863, but it took the electrification of Detroit to move away from a hay-based system. And it took another development to move away from streetcars to today’s bus fleets and personal cars.

But that story carries with it an urban myth; that of General Motors killing streetcars: According to the myth, it was the expansion of the Big Three — and, specifically, General Motors’ efforts to get commuters to forego streetcars in favor of individual automobiles — that brought pressure to bear on electrified mass transit: it was time for people to get off the streetcar and buy their own car.

The truth, of course, is more complicated: Yes, a GM-controlled entity called “National City Lines” did buy a number of municipal trolley car systems across the country — and in Detroit. And, yes, over time, those streetcar operations ceased. But that was for economic reasons. First, bus lines were less expensive to operate, and far less costly to build because there were no rails. Second, it was easy to extend bus service; add a stop. Extending a streetcar meant more rails and more overhead lines.

In addition to the streetcars, there were also electric railways — or trolley lines — running from Detroit into the suburbs; the right of ways exist to this day. (As an aside, Henry Ford once purchased the DT&I Railroad, dumped the steam engines and replaced them with more reliable electric locomotives. He then built a series of catenaries (u-shaped arches) that supported overhead electric wires that ran 15 miles from his famous Rouge Plant complex to one of his factories in Flat Rock, Michigan, and on into northern Ohio. Today, many of the arches remain in place.)

In Detroit and its close-in suburbs, electric streetcars ran successfully from 1886 to 1956. Then they were completely replaced by buses, with 183 remaining streetcars having been sold in 1955 to Mexico City (for $700,000), where they continued to operate until 1986.

It’s ironic, then, that today, GM and other American auto manufacturers are trying to outdo each other in reintroducing the general public to a new version of electrified transportation – in the form of personal EVs.