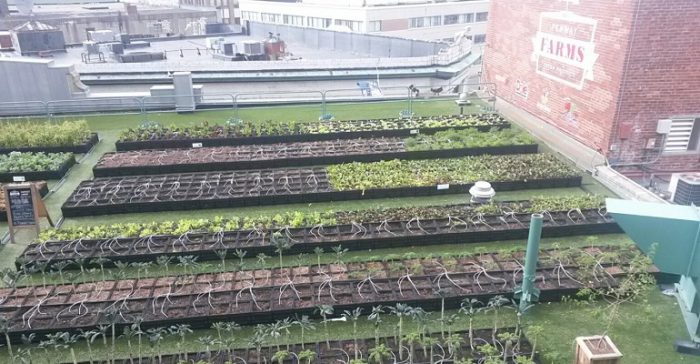 Green roofs – also known as living roofs – are great enough when “all” they do is beautify and insulate buildings and provide clean oxygen. The ultimate benefit, though, comes when they produce food.

The Boston area has several exceptional food-producing green roofs to speak of, including an installment at its most identifiable structure, Fenway Park. The 7,000-square-foot ballpark vegetable patch known as Fenway Farms provides organic herbs, greens, strawberries, and vegetables (even sweet potatoes!) for meals served in the exclusive EMC Club, which overlooks both the playing field and Yawkey Way. This is not Major League Baseball’s only organic garden—and that’s a very good thing—but it is certainly its largest. The plot’s annual yield averages 4,000 pounds of produce.

Fenway Farms was developed atop the team’s Front Office in the spring of 2015 at the behest of team owner John Henry’s wife, Linda Pizzuti, who wanted the Sox to set a sustainable-living example to fans. It had been a winter of record-breaking blizzards for the area, and as spring training got underway in Fort Myers, the Boston ballpark still had several feet of snow atop its roofs. The rooftop garden was completed in time for opening day, and it quickly became a popular stop on the regular Fenway Park tours. A few teams have had ground-level gardens over the years; the World Champion 1969 New York Mets raised a single tomato plant in their bullpen that season. After that, the team’s bullpen coach, Joe Pignatano, and other  staff maintained a 30-foot-long vegetable garden behind the right-field fence well into the 1980s, raising tomatoes, lettuce, squash, eggplant, and pumpkins. Now, Fenway Farms serves as a 21st-century version of that concept in the midst of MLB’s oldest venue.

A short drive up I-95, the popular Whole Foods supermarket in suburban Lynnfield boasts America’s first supermarket farm: a 17,000-square-foot rooftop garden that supplies the store with about 7,000 pounds a year of vegetables, fruits, greens, herbs, and cut flowers. This hyper-local produce is displayed in a specially marked area of the store, and some of it is used in prepared foods sold there. Hoop houses, intensive growing methods, and succession planting all contribute to maximizing this year-round yield.

Both of these highly visible rooftop gardens were installed by two collaborating local (based in Somerville) companies, Recover Green Roofs, LLC and Green City Growers. Some of the crucial factors in living roof design include waterproofing, the weight capacity of the roof, safety railings, and irrigation, requiring the expertise of structural engineers and other specialized technicians. Because the Whole Foods garden was put in prior to the store’s opening, the installation was a bit less complex, as retrofitting was not required.

Aside from those all-important vitamins and minerals, here are some more benefits of these miniature farms in the sky: