Last week, PG&E posted a story on energy savings in groceries that profiled the Save Mart in Ripon, CA. The piece makes the point that groceries are among the most energy demanding of facilities, which means that they need to be flexible. That makes it logical that these stores would be at the cutting edge of energy efficiency efforts.

[mks_pullquote align=”left” width=”300″ size=”20″ bg_color=”#1e73be” txt_color=”#ffffff”]Refrigeration is a big deal in grocery stores.[/mks_pullquote]There also are marketing realities. For instance, managers are reluctant to put doors on refrigerated cases. The thought is that the barrier discourages shoppers from grabbing the frozen pizzas and ice cream. Doors were added, however – and energy use was cut by 75 percent. And any fears that sales would suffer were unfounded:

Since installing doors this year in the deli and egg cases, store manager Mike Moreno found that it had no impact on keeping shoppers from accessing or finding the products they need. And it actually improved customer confidence.

Another energy-cutting trick is the installation of motion sensors in the freezer aisles, the story said. The lights go on when people approach a freezer case and off when they pass by or leave.

Similar moves are being made elsewhere. For instance, budget-conscious 365 by Whole Foods Market — which is slated for 18 locations in nine states – also has plans to reduce energy escaping from cooling cases. Today.com, in a profile on the new stores this week, not the energy efficiency effort:

They also employ a lot of energy-saving tactics: Most notably, there are doors on the dairy and meat cases, and the frozen case items are under glass doors you lift as well. Veggies and fruit are, in large part, corralled in a separate, cold-case-like windowed hallway, to keep cool air from escaping.

The Q-Sync fan motor, according to the DoE, has proven to be far more efficient than the two traditional approaches: shaded-pole motors (which is about 20 percent efficient) and electronically commutated motors (ECM; about 60 percent efficient). The technical description of the Q-Sync is that the “rotation of the motor’s shaft is synchronized with the frequency of the supplied current.” QM, the press release says, has found a cost-effective way to apply the idea to commercial refrigeration. The approach cuts energy use by 30 percent compared to ECMs and 80 percent compared to shaded pole technology, the DoE says. 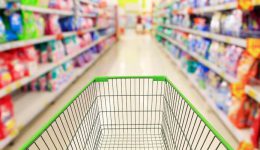 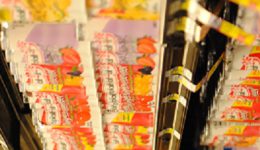