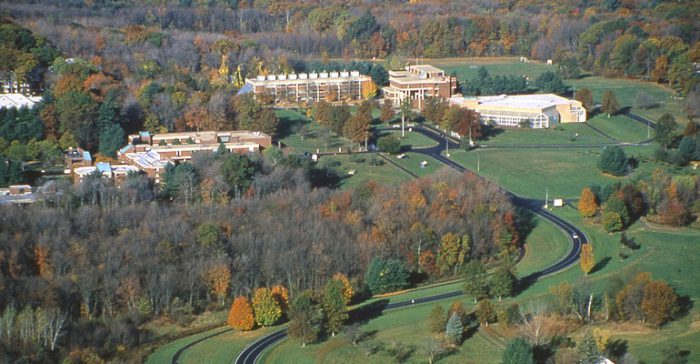 Hampshire College, a liberal arts school known for its innovative learning structure, is on to something else interesting. Its new campus center building has been designed with net zero energy (NZE) heating, cooling, water gathering, and self-sustained wastewater treatment systems that are expected to cut annual energy bills in half and make the campus the first in the U.S. to use 100% renewable power.

Set to open in April 2016, the 17,000-square-foot R. W. Kern Center will be the heart of the campus, containing administrative offices (including financial aid and admissions), some classrooms, the campus store, and a café. The scope of the project grew significantly throughout the planning stage. The officials’ first endeavor was to install solar panels just for the Kern Center, but they decided to look in to what it would take to supply energy for the entire 800-acre campus, which Hampshire College officials say uses the equivalent of 590 average-sized homes. The final plan is to install 15,000 photovoltaic panels on two spots on the grounds totaling 19 acres. The installation will be done by SolarCity of San Mateo, California.

The college hopes to earn a rarefied designation through the Living Building Challenge, the highest level of rigor for certification through the International Living Institute. To date, only twelve buildings worldwide have achieved full NZE Building Certification through the program. Qualifying projects must use sustainable construction materials (locally sourced, if possible) and then meet all program requirements while operating for a full year at full occupancy.

In addition to sustaining operations, the Kern Center’s systems will serve as learning tools – for the public as well as Hampshire College science students. Some classes will focus on hands-on work directly involving the sustainable systems, and demonstrations and general information on how the systems are performing will be available publicly on the Internet.

Hampshire College made mainstream news last year when it dropped standardized testing scores as an admissions factor, but it has always had a fine reputation among the environmentally and socially conscious. EcoWatch recently suggested that it’s the greenest college in the world. A farm on campus grows food for the cafeteria, some paved areas were eliminated to site this new NZE campus center, and mowing was stopped on 15 acres of grass several years ago, saving tens of thousands in landscaping costs and lowering the carbon footprint while also bringing back significant wildlife populations.