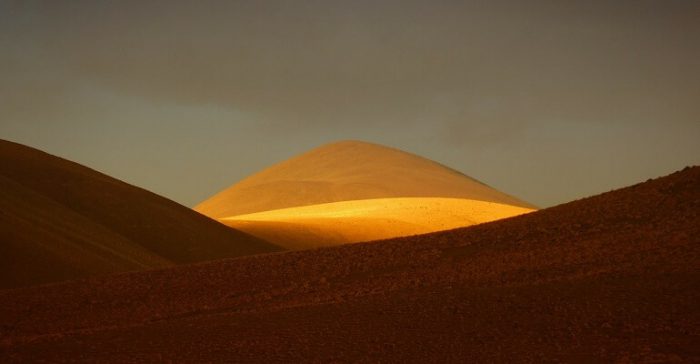 Using sunlight and gold to change carbon dioxide (CO2) into fuel may sound like a task for a Hogwarts graduate, but it’s the kind of magic that researchers at the National Energy Technology Laboratory (NETL) are performing to make a positive impact on the world’s environment.

A glitzy new process, conceived and developed by NETL researchers and their collaborators, uses gold nanoparticles to efficiently convert CO2 into usable chemicals and fuels. It’s a “carbon negative” breakthrough that consumes more CO2 than it puts out, and it could lead to an effective industrial-scale way to reduce CO2 emissions.

The research team developed a special form of gold nanoparticle composed of exactly 25 gold atoms to activate the CO2 transformation. Electrochemical conversion of CO2 typically requires a high amount of energy, but the team’s new catalyst makes the process more efficient. Researchers were able to power a small CO2 reactor with inexpensive, off-the-shelf renewable energy sources like solar panels and solar-rechargeable batteries. According to the study’s lead researcher, Dr. Douglas Kauffman, “demonstrating that renewable energy resources can efficiently power CO2 conversion is a game changer that will hopefully lead to the development of large-scale systems.”

So what makes this golden innovation “carbon negative”? By using renewable energy sources to recycle waste CO2 without generating new CO2 emissions, the NETL process actually results in a net reduction in CO2 gas, making it a carbon-negative energy cycle. By contrast, most fossil fuel-powered CO2 conversion processes currently result in a net increase of CO2, which means they are “carbon positive” and do not help mitigate CO2 emissions. If implemented on a commercial scale, NETL’s process has the potential to reduce atmospheric CO2 emissions, aiding efforts to fight climate change.

The research team estimates that renewable energy sources like solar and wind can efficiently power large-scale CO2 conversion systems to convert tons and tons of CO2 per day. Encouraged by their results, the team is now designing next-generation CO2 conversion catalysts that require even less energy. The endeavor may require an extended stay in the Potions room, but this is a wand-free feat. It’s better than magic — it’s science.

This post was written by the National Energy Technology Laboratory, one of the Department of Energy’s 17 National Labs.