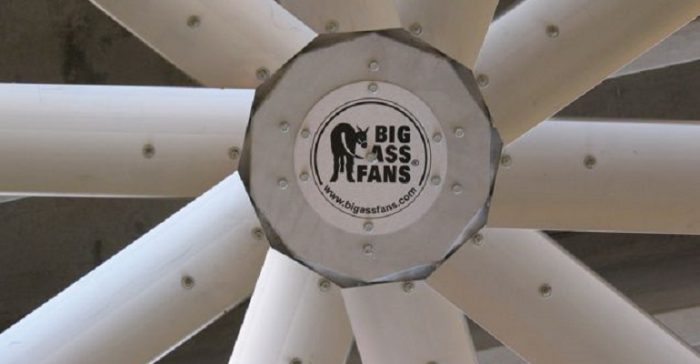 In an effort to highlight an energy efficient solution for winter heating, Zondits spoke with Christian Taber, an engineer at Big Ass Fans®, about fans and controls that automate heat destratification. The company designs and manufactures industrial, commercial, and residential fans, ranging from the massive 24-ft Powerfoil®X2.0 to the elegant 52-in Haiku®. Big Ass Fans can reduce the load on heating systems and cut heating costs by as much as 30%.

As an applications engineer, Christian is an integral member of the team that works to maximize fan efficiency and thermal comfort. Among his central projects was development of the company’s LEED Gold®, one-of-a-kind research and development lab, which is dedicated to testing cutting-edge innovations in air movement and thermal comfort.

In what locations do you frequently install fans for destratification, and what markets do you see as underserved?

The market for Big Ass Fans has grown exponentially in the last 10 years. The company’s first fans were designed for cooling dairy cows, but our product line quickly expanded to include fans for industrial settings, such as warehouses and factories. It can be difficult to keep occupants comfortable efficiently in these large, open spaces. We install a lot of fans for destratification in industrial spaces.

In the last few years, we’ve introduced our direct-drive product line, including Isis®, Element, and Essence®, which are designed for sound-sensitive air-conditioned public spaces. Restaurants, hotels, retail stores, and hospitals—especially those with atriums or lobbies higher than 15 feet—will see the most energy savings related to destratification. These commercial atriums and lobbies currently have the least current use and largest opportunity for savings.

Another increasingly popular trend is hybrid systems that include both air conditioning and natural ventilation. Big Ass Fans worked with DPR Construction to develop a series of net-zero offices. An impressive example is the company’s net-zero headquarters in Phoenix. It’s an office space that relies on natural ventilation and evaporative cooling in the morning, elevated air speed once the temperature starts to warm up, and air conditioning only during the hottest parts of the day. As electricity gets more expensive and energy codes get more restrictive, I believe these hybrid systems will continue to rise in popularity.

Another example is Manitoba Hydro, which installed Big Ass Fans in a 75-ft high atrium. Before the fans were in, the owners had problems with excess heat collecting at the top of the building in winter. The destratification goal was to cool the upper stories of the building and move heat down to the floor level to increase system efficiency and comfort.

We’re familiar with using destratification fans in heating scenarios, but what about cooling? Are there situations when it’s beneficial to run them during the summer for the convection effect, or is it best to avoid running them and bringing the hot air down to the occupants’ levels?

As long as heat is transferred away from the body, it is beneficial to run fans during the summer. There are two main ways that fans accomplish this. The first is heat transfer via convective air movement, achieved by blowing air across the skin. The second is dependent on the heat of vaporization, which is the result of blowing air across the skin to increase the rate at which moisture is evaporated off the skin. The combination of these two effects determines the amount of cooling provided by the air movement.

Ceilings can have a number of lights, a scoreboard, or other equipment that might be located in an ideal fan location. How do you typically work around that?

We have teams of engineers and designers at Big Ass Fans who work with architects, engineers, and building owners to ensure that fans are correctly specified and installed in a space. If there’s an obstruction that can’t be moved, such as a scoreboard in a gym, our teams recommend adjusting the size and placement of the fan. Big Ass Fans works directly with each of our customers to make sure the product installed is appropriate for their ceiling height, lighting grid, and HVAC system.

What are typical payback periods and energy savings (or a range of payback periods/savings) that your customers see? Do you have any case studies you can share to illustrate this?

The average payback period for a well-designed destratification project is 2 to 4 years. The potential for payback is linked closely with the amount of heat at the ceiling and the size of the utility bill. The best example that comes to mind is a hangar project with British Airways at Gatwick Airport in London. The payback on that project was 3 months because the heat stratification was so extreme and the space was very tall. The installation of the Big Ass Fans increased air circulation and reduced the carbon footprint of the facility, saving more than $114,000 in the first 4 months alone.

Many of our clients come to us because of employee comfort complaints. There’s definitely a cost associated with being too warm in the summer. A Berkeley National Laboratory study on productivity and higher air temperatures concluded that temperatures over 77°F decrease productivity. For example, an 85° workspace would have an 8.8% decrease in productivity over a 77°F environment.

Is there a rule of thumb you use to determine whether or not it would be beneficial to install a Big Ass Fan to control stratification?

The spaces that gain the most are those with high ceilings. If there’s a significant difference—more than 5°F—between the floor and the ceiling temperature, that space could see a huge benefit from an automated ceiling fan controlled for heat destratification. Additionally, if a space has heating supplies and returns near the ceiling, it’s going to be more prone to stratification and would benefit from a fan programmed to help destratify it.

Are there ceiling height maximums and minimums at which it doesn’t make sense to install the fans?

From a thermal destratification perspective, a room with any ceiling height can benefit from the fans. Spaces with a significant difference in temperature between the ceiling and the floor will see the most impact on energy consumption from the heating system. For cooling, the key is being able to generate elevated air speed at the occupant level. The higher the ceiling, the larger the fan that is required, generally speaking.

Do you have guidance for quantifying savings‒a suite of algorithms, frequently used software, or a few equations? What inputs are usually considered besides ceiling height and temperature differential?

It’s easiest to work with an applications engineer at Big Ass Fans, but if you want to do your own engineering and calculations, there’s also an ASHRAE Journal article written by Dr. Richard Aynsley, who has since retired from Big Ass Fans, called Saving Heating Costs in Warehouses. The article outlines a set of equations to estimate energy savings from destratification.

There are also energy simulation programs, but they assume a space with well-mixed air, which is what the fans will provide. To simulate stratified air you will need to create a scenario with a similar amount of excess heating energy in an alternative design.

Can you tell us what you study at the R&D lab? Is your work focused on blade shape or air flow in the room?

The Big Ass Fans lab employs a variety of engineers. Our aerospace engineer looks at airfoil shapes,  winglets, and wing fences to create the most efficient fan airfoils possible. This team uses computational fluid dynamics (CFD) and real-world modeling in test rooms of various sizes. They also conduct life-cycle testing, where we stress our fans to look at how we can improve next-generation designs. The lab is an engineer’s playground—you can test performance in all sorts of real-world applications and mock-up spaces to verify that your model is based in reality.

For example, when the designers of California’s Oakland Unified School District needed to move air while meeting strict energy requirements for their new CHPS-certified buildings, we created a mock classroom in the lab to study the problem and develop a custom solution for them.

Congratulations on the LEED certification of your R&D lab. Were there any roadblocks involved with making the lab a LEED-certified building that you think wouldn’t have been an issue if it were a more standard building?

The hardest part was not the design, but paving the way for elevated air speed credits in the LEED® certification process. We were the first organization, to our knowledge, to claim credit for providing equal levels of thermal comfort with a hybrid air movement and HVAC system. That required a formal interpretation from ASHRAE Standard 90.1, which is available on their website. Ultimately, we were able to claim energy savings for the design—the LEED scorecard details are available on the USGBC website.