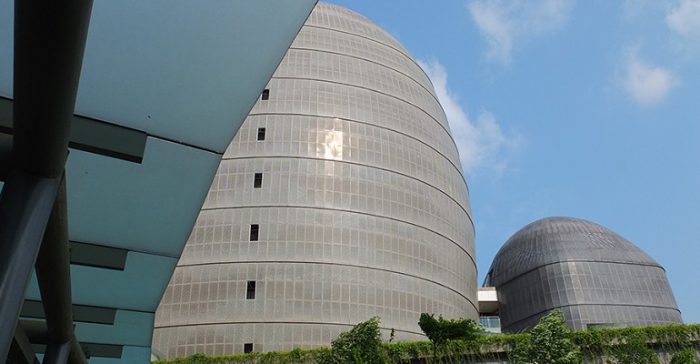 Remember that futuristic-looking building I wrote about some months back? The tall grey egg-shaped tower is home to SkyStar, one of Jakarta’s fanciest co-working spaces and startup incubators.

The building was named the most energy efficient building in Southeast Asia last year. It also resembles a set straight out of Star Wars’ Cloud City. The towers are part of the Universitas Multimedia Nusantara complex, a university associated with Indonesia’s Kompas Gramedia publishing group.

But this story isn’t about the startups in SkyStar’s incubation program (I’ll get to them another time). It’s about the tech company that designed the structure. Its name, Synergy Efficiency Solutions (SES), is a mouthful, but it solves a straight-forward problem. SES helps existing buildings, like hotels, hospitals, or universities save energy, and it designs new buildings with optimal energy efficiency in mind.

SES primarily deals with hardware. It enters a building with measuring equipment and identifies and upgrades the big energy wasters. But the company also relies on sophisticated tech solutions, like 3D modelling to study energy flows, and sensors to monitor energy consumption in real time.

SES’s business model is also interesting. Rather than getting paid based on work hours, it’s compensated with a percentage of money saved after the energy bill drops.